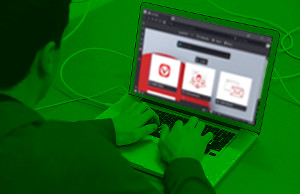 In Vivaldi Portable 5.4.2753.28 for Windows build with special version of hackerman launcher.

Vivaldi developers previously work on Opera but out there after company was sold to new owner.

Vivaldi based on Chromium sources offer to us completely new way to settings page like it was in old Opera versions, but using my launcher you can run standard chromuim settings page and also run Vivaldi with other hidden features.

Using my launcher you can run built in games in Vivaldi – standard Chromium Dino Game and Vivaldia – cyberpunk monocycle runner.

In version 5.4.2753.47 I update launcher for better portability – browser now didn’t save cache data, counters and data in base system – all saved in profile data folder.